Since the end of April 2022, large-format photos from the art project TAINTEDoceanLOVE are on display in the foyer of the OZEANEUM Stralsund.

The journalist Ann-Katrin Schröder and the photographer Oliver Franke have staged professional water sportsmen and women in a new perspective: the human being as a victim in the picture, threatened by his or her own deeds in reality. The images, which are both evocative and aesthetic, are intended to draw attention to the exploitation and destruction of the ocean as a habitat.

The exhibition TAINTEDoceanLOVE at the OZEANEUM is presented within the UN Ocean Decade​​​​​​​, which started in 2021. It aims to raise public awareness of the central role of the ocean and to develop solutions for more sustainable use.

"With our pictures, we want to show that humans are inextricably linked to their interventions in the marine environment and can ultimately become victims of their own actions," says initiator Ann-Katrin Schröder.

"We consciously work together with windsurfers, sailors and swimmers - these people love the sea. It is their element and an elementary part of their profession, so protecting the oceans is a special concern for them," says photographer Oliver Franke, describing his work.

Until the end of 2022, four motifs from the TAINTEDoceanLOVE series will be on display in the foyer of the OZEANEUM as four-metre-wide and ten-metre-high banners on the white steel façade, alternating every two months. In addition, exhibition panels provide information about the project and the UN Ocean Decade.

You can find more motifs here. 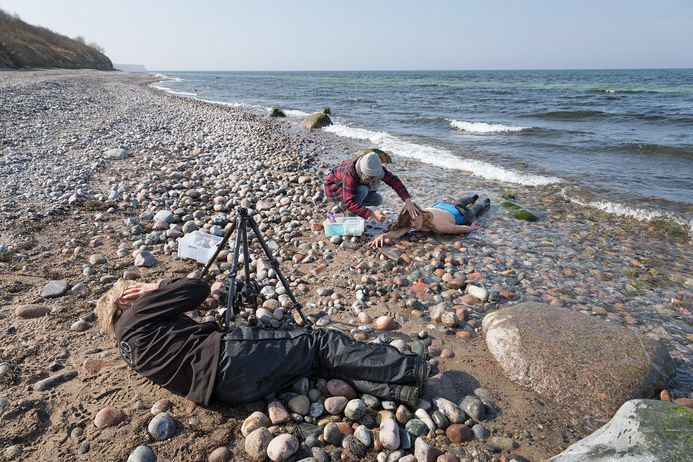 The United Nations has proclaimed a Decade of Ocean Science for Sustainable Development (2021-2030).

Our Museum is an official network partner of the German Ocean Decade Committee and is participating in the Decade with new exhibitions, events as well as research on biodiversity and noise in the ocean.